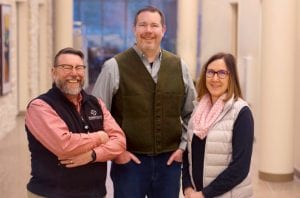 MANISTIQUE – Now in its 52nd year, the annual CBC Fund Drive is currently underway. The fundraiser culminates each year on Palm Sunday with a CBC Radiothon – this year on April 14.

Crumb is currently serving as CEO of Schoolcraft Memorial Hospital and has more than 35 years of experience with critical access hospitals, rural health clinics, and strategic planning. He holds a Master of Science degree in healthcare operations management.

Crumb enjoys hunting, hiking, snowshoeing, kayaking, and cooking. He lives in Manistique with his wife, Terri, and has joined the Manistique Rotary Club and the Schoolcraft Tourism and Commerce Board.

Braun grew up in Manistique and graduated from Manistique High School. After high school, she attended Northern Michigan University and earned a Bachelor of Science in business/accounting and earned a Master of Business Administration from the University of Michigan in 2004.

Braun began working at Port Inland Quarry in 1996, and, after holding various accounting roles for the Great Lakes Operations, in 2010 she transitioned into the logistics manager position for Carmeuse Great Lakes Quarries. Her team is responsible for shipping approximately 18 million tons of limestone, via lake freighters, across the Great Lakes.

Braun has three children – Olivia is a senior at the University of Michigan, studying nursing; Taylor is a sophomore at Northern Michigan University, studying business; and Tanner lives and works in Manistique.

“This is my second year serving on the board for CBC,” said Braun. “As far back as I can remember, I have either attended or watched CBC. When we were kids, we loved to listen for our name called when our donation was read, but bidding on the auction items is still one of my favorite parts.

Last year was an eye opener to me,” she continued. “This was my first time getting a glimpse behind the scenes of what it takes to pull this annual event off. I was amazed at our community and how they came together to help make this event a success. This is our 52nd year, and I plan on being a part of keeping this tradition going for another 50 years.”

Stoll graduated from Manistique High School and went on to receive a bachelor’s degree in electrical engineering technology from Lake Superior State University. After graduation, Stoll began his career by taking a position as an electrical project engineer with MJ Electric, based in Iron Mountain, Mich.

In 1999, Stoll and his family moved back to Manistique when he got his start in the mining industry at Oglebay Norton’s Port Inland Plant. Then, in 2007, Stoll began his career with Western Lime (now Graymont) as the plant manager of the Port Inland Plant – a position he still holds today.

Stoll and his wife, Amy, continue to live in Manistique and have four daughters: Samantha, Ally, Lilly, and Paige.

“I am honored to be a part of CBC,” Stoll said. “Each year, our CBC volunteers put forth a tremendous effort to ensure the CBC events continue to build on previous successes and we are so thankful for all your past and future contributions to the CBC charities. It is truly a privilege to serve a third chair this year.”

For more information about the CBC Fund Drive, or to volunteer with or donate to the cause, visit www.cbcschoolcraft.org or the organization Facebook page: “CBC Schoolcraft County”.

This site uses Akismet to reduce spam. Learn how your comment data is processed.